Really kind of unsure what to make of this one.

I think Evelyn Waugh’s books are held up as sort of capital-C classics. Generally, when reading a Classic, I expect to come away with a degree of “oh yeah wow definitely” or a flat “what did I miss”. Men At Arms is, I reckon, good. Not spectacular – quite rambly in parts, and generally just sort of there, but in a pleasant way. The protagonist is some sort of Tory noble and the novel charts his attempts to join the forces at the outset of WW2, and then his experiences once he gets in. I don’t really know how accurate any of it is, it strikes me as very well-observed and clearly aware of what things were like in London in 1940, which is no surprise given it was published ten-odd years after the war, but it’s possible the Halberdier Corps was more fictionalised than not. [googled: It was made up]

Regardless, as a sort of historical thing it’s very interesting, not least because it’s so centred on part of the officer class, which, oddly, is not an experience I’ve read much about. So it had that sort of Full Metal Jacket boot camp vibe, except much more Tory and comfortable.

The writing itself is always fluid and pleasant and occasionally beautiful to the extent that you actually stop and go “good, that”.

It’s part of a trilogy, which is annoying, as it sort of kicks up a notch in the last fifty pages and now I need to source the rest of them in a public library, which tends to be a recipe for frustration, but there we go. [update, found an edition in the main Islington library with all three books compiled. A+ ] 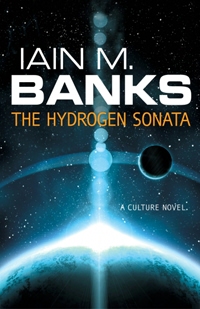 Sort of a futility to reviewing these Iain M. Banks books. They’re not all the same, but they kind of are, and the differences, positive and negative, tend to only really make sense if you’re already knee-deep in Culture novels.

In this, I think the final ( L ) Culture novel, Iain M. Banks goes deep on the notion of Subliming, which had previously been quite implicit. I’m not sure how, but he fixes the tedious passages of Mind-to-Mind conversations that dominated Excession, possibly just through the simple technique of not giving them all indistinguishable phrase-length names. The twist isn’t as crucial as in Look to Windward, so it kind of doesn’t matter that it’s predictable. There’s too much time spent chatting about the epononymous sonata, but that’s allowed. The protagonists are a bit too scattered, even for an M. Banks novel, which poses problems for the pace and focus of it – there’s only one obvious candidate for main character, but she loses a few chapters to a character who is almost identical, diluting both of them.

IDK, as ever, they are what they are. I think I’ve just borrowed the only two Culture novels I haven’t already read from the library, so we’ll see how they go. Past couple of years have been disappointing, in terms of M. Banks. A shame.