Solid bit of Mock The Week level humour there which you’ll get upon completion of the reviews. BBC3, you know where to find me.

Been a bit delayed this one, which does mean there’s a few books to get through, which is nice. Also the first war book I’ve ever given up on! And I’ve read some mediocre war books in my time. Feel like some nerd off a WW2 forum is going to march up covered in Nazi memorabilia (they’re always weirdly keen on Nazi stuff these lads) and call me a “fake nerd” now.

Song of the week was gonna be a Kanye one but they’re still not on YouTube (my free Tidal subscription ends tomorrow 😦 ). Then I thought of a new Dylan one I saw him play at work but it’s not on YouTube either (the Internet is an upsetting place here’s a live version at least). So have an old one, I guess.

video may be NSFW, it asked me to verify my age.

A Man of the People – Chinua Achebe

There’ a very weird pull quote on the back of my edition of this one, from Clockwork Orange author Anthony Burgess – “probably the best book to come out of West Africa”. It gave me pause a little, but I could hardly feel too superior, as I probably wouldn’t have heard of Achebe if not for his status as The Great African Writer.

[This review almost got crippled as I waded into a debate over #problematic issues way out of my understanding, so I’m just going to straight jump to the next bit.]

Regardless, I felt like, tokenistic as it was, spotting A Man of the People on the shelves of my local library was a good way to take a break from war history books. And it was! It’s a short and fairly light-hearted little book (novella?), told from the perspective of an idealistic young teacher who gets involved in politics for dubious reasons and gradually disillusioned. Centred on the titular man of the people, a very entertaining corrupt politician, Achebe provides a more nuanced discussion of corruption than is common, condemning it while illustrating how it’s rationalised, etc. Women don’t do too well in the story, reduced to pawns in the central power game, but apart from that, it’s good.

The Road to Stalingrad – John Erickson

Christ this one made me want to pack it all in and go back to reading Batman comics. I was conned by the cover, which, being a re-edition, made it look like a vibrant new best-seller history, read-able and maybe a bit shallow. Instead, it’s a seminal 1975 work from one of the Anglo world’s leading experts on Soviet military history. and it is deathly dull.

Readers of the blog know I’m a big fan of war books. Love me some tank battles and analyses of manoeuvres. But I’ve got to confess, I fell asleep reading this one repeatedly. Turns out there are only so many times you can read detailed descriptions of command reshuffles and shifting of brigade positions in January 1940 before you throw a book at a wall.

I held out until Barbarossa was launched, assuming it’d pick up then, with one of the largest invasions of the war, a world-historic shock etc. etc. It didn’t. It was still boring even as millions of men and machines went to war. Got sick of it, packed it in. Next.

Nemesis: One Man and the Battle for Rio – Misha Glenny

Another “I should stop reading about tanks and this has a nice cover” read, this one. It was also a book about Brazil by an author I vaguely recognised, so I thought fair. Also, gang/drug wars are not too far off my usual pursuits, so.

Nemesis is good. Pulpy, fast-paced and vividly written, with a fascinating subject and balanced analysis, it’s what you would hope for from this kind of book, mostly. It tells the story the rise and fall of ‘Nem’, one of the Rocinha favela’s most successful drug lords. It is based on extensive interviews, including with Nem himself, which helps capture the ambiguity of his status. In the absence of real state control of the favelas until very recently (and probably even today), the drug lords came to occupy a position of power over their inhabitants, which extended to providing some of the basic services we expect from the state. Glenny does well at capturing the difficulty of judging a man who is, on the one hand, responsible for a small and brutal private army, unelected and violent, but who also offered stability, peace, and protection for the residents of Rocinha.

It’s impressive he captures this nuance, because it’s a breakneck-paced book. Drug lords rise to power and are struck down in mere pages, and I stopped really paying attention to their names. Part of this is because, until Nem is in charge, Glenny does a bit of time-hopping, sometimes taking us on tangents that stretch back ten years before returning to the narrative. This can be a bit confusing if you’re trying to pay attention. He’s also a bit keen on Foreshadowing Dramatically – ‘little did he know these steps would change his life etc. etc.’ which fair enough.

It’s also fascinatingly like The Wire at times – there are parts that are almost identical to Season One, and I wish Glenny had done more on the police investigations. 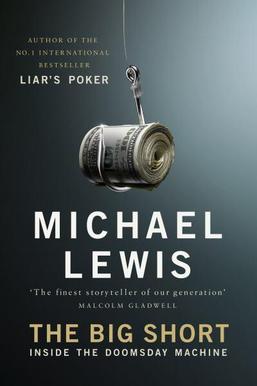 Watched the film of this and finished the book tonight, but it’s not really going to be a film review because I don’t like or understand films well enough (it was alright, an entertaining, I didn’t understand the changes they made, but I liked some of the music).

The book is good! It’s very thrilling, despite being about the dullest, most fiddly collection of acronyms and interest rate swaps. By choosing the handful of outsiders to carry his story, Lewis humanises the baffling workings of the mortgage bond market. This works to an extent. It was still very confusing at times – to the point where he occasionally explicitly says “don’t worry about understanding this bit”. I think some knowledge of markets and trading stuff is required going in – I kept having to re-explain “shorting” to myself, which, admittedly, was probably an entry requirement for a book with this title.

There’s a politics to it, naturally (less so than in the film, which crowbars in some Meaning at the end and comes off like Owen Jones). It’s interestingly pitched, because arguably these are all awful bankers who all made millions for work of no social value and really, to the bin with them all, but, without obscuring the real social cost of their decisions, Lewis does successfully make the “underdog” millionaires sympathetic characters. Partly through some interesting but kind of cheap “look this guy has a puppy” humanising techniques, partly through this being a story set within the world of banks, traders, and brokers, it works! I stopped having Corbyn-y twitches about five pages in*

*apart from the absolute seething realisation of how much money was sloshing around these books and how I didn’t have any of it, which never really went away. I think I’d have hated banking, and the door closed on me anyway when I didn’t get on the career track aged 18.2, but man alive, these lads made millions and I was quite pleased when I got a 50p/hour pay-rise the other day.

so you see the joke was that, there were books on corrupt politicians, literal Nazis, and drug lords this week but maybe the bankers are the worst? I’m available for hire if you need someone to write the slogan for your next anti-austerity protest.